Bargain বাংলা অর্থ. What is the meaning of Bargain in English? What does Bargain mean? What is another word for Bargain? Definition at online dictionary. 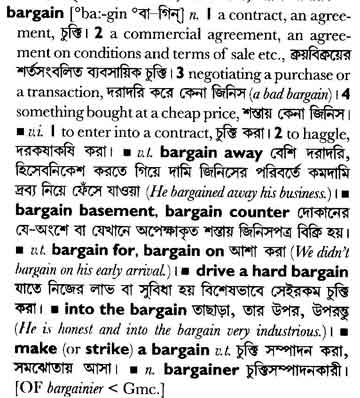 Bargain Example in a sentence

Bargain Example in a sentence:

War itself had become a matter of arrangement, bargain, and diplomacy.

He took it all silently and he carried out his bargain faithfully.

And as often as not he took away with his bargain a glance which was equivalent to a kick.

"We will strike a bargain," returned Bertha, with her wonted gayety.

His horses turned out to be gentle and strong, and we made a bargain without noise.

And then Jose-Maria was the worst of comrades in the bargain.

I made a sign to the veterinarian that we must pass on to another; he made another sign that he would drive a bargain.

There are two sides to every bargain; and one side is as important as the other.

And (lowering his voice)—I hope you get the best of the McMinns in the bargain.

"I have made my bargain," the professor answers, in a tone of elation.

bargain early 14c., from O.Fr. bargaignier (12c., Mod.Fr. barguigner) "to haggle over the price," perhaps from Frankish *borganjan "to lend," and ultimately from P.Gmc. *borgan (cf. O.H.G. borgen; O.E. borgian, source of borrow). Another suggestion is that the O.Fr. word comes from L.L. barca "a barge," because it "carries goods to and fro." There are difficulties with both suggestions. A bargain basement (1899) originally was a basement floor in a store where bargains were displayed.

Bargain Definition
1.
an advantageous purchase, especially one acquired at less than the usual cost:
The sale offered bargains galore.
2.
an agreement between parties settling what each shall give and take or perform and receive in a transaction.
3.
such an agreement as affecting one of the parties:
a losing bargain.
4.
something acquired by bargaining.
5.
Informal. an agreeable person, especially one who causes no trouble or difficulty (usually used in negative constructions):
His boss is no bargain.
6.
to discuss the terms of a bargain; haggle; negotiate.
7.
to come to an agreement; make a bargain:
We bargained on a three-year term.
8.
to arrange by bargain; negotiate:
to bargain a new wage increase.
9.
to anticipate as likely to occur; expect (usually followed by a clause):
I'll bargain that he's going to give those company directors plenty of trouble.
10.
bargain for, to anticipate or take into account:
The job turned out to be more than he had bargained for.
11.
bargain on, to expect or anticipate; count or rely on:
You can't bargain on what she'll do in this situation.
12.
in / into the bargain, over and above what has been stipulated; moreover; besides:
The new housekeeper proved to be a fine cook in the bargain.
13.
strike a bargain, to make a bargain; agree to terms:
They were unable to strike a bargain because the owner's asking price was more than the prospective buyer could afford.
Article Box
Grammar
Proverbs
MCQ Solution
Application
Categories